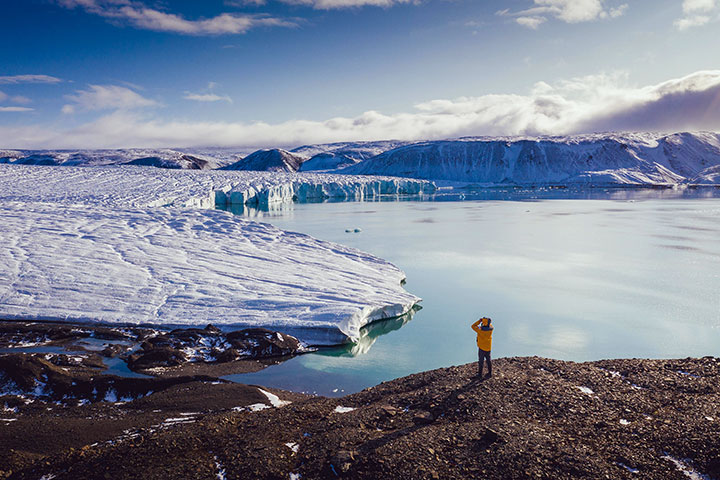 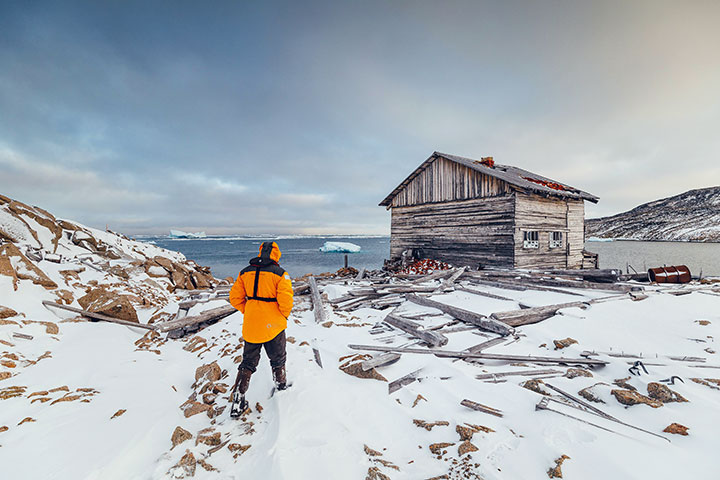 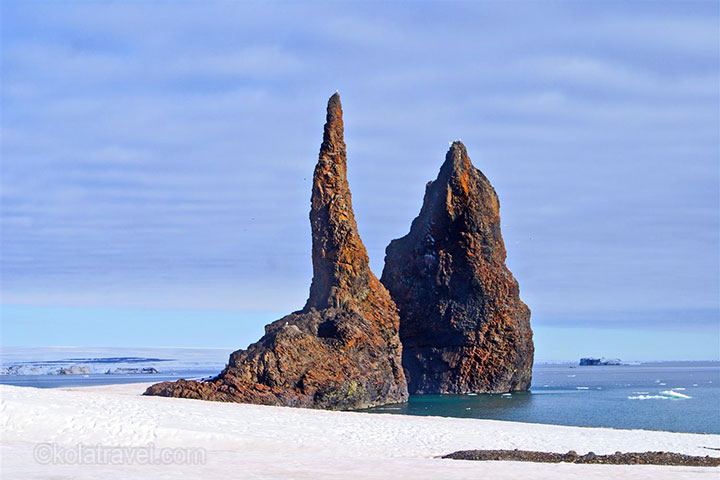 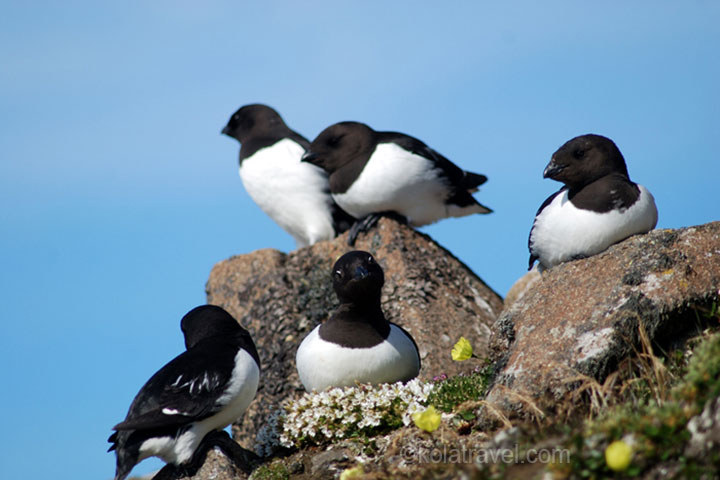 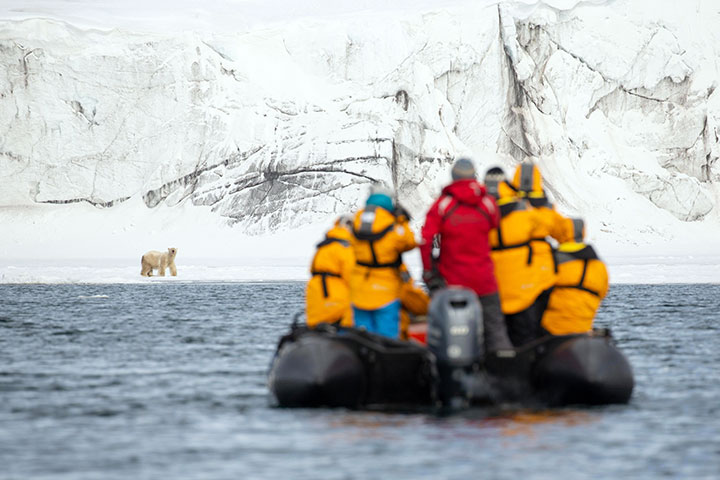 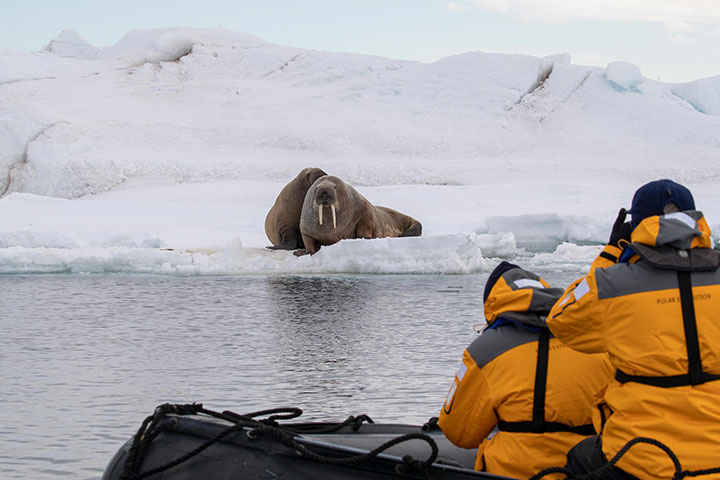 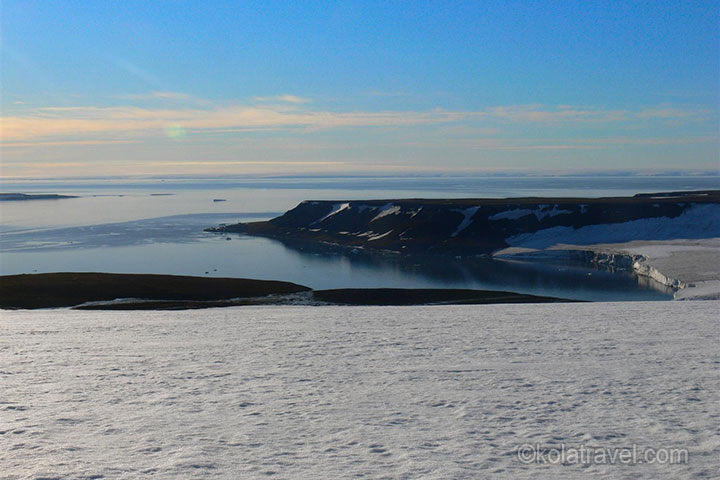 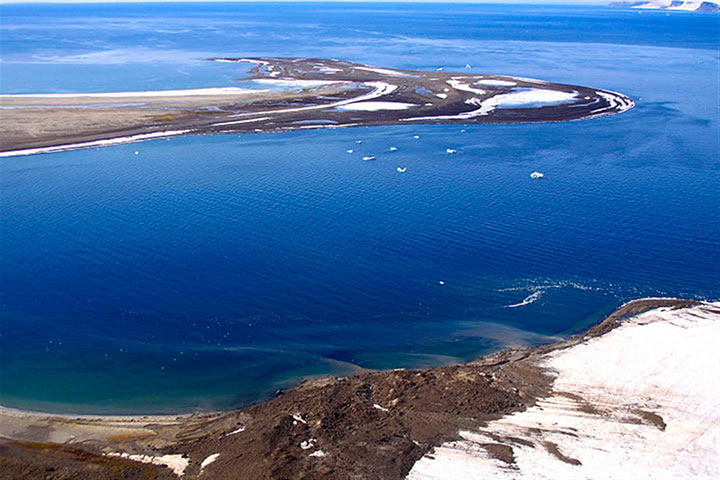 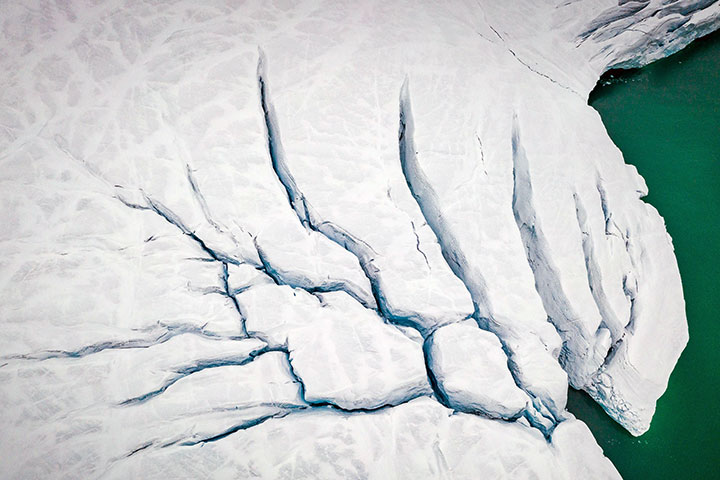 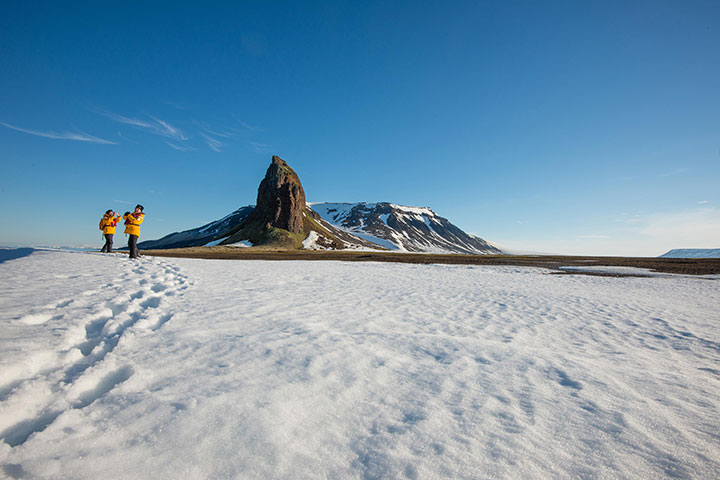 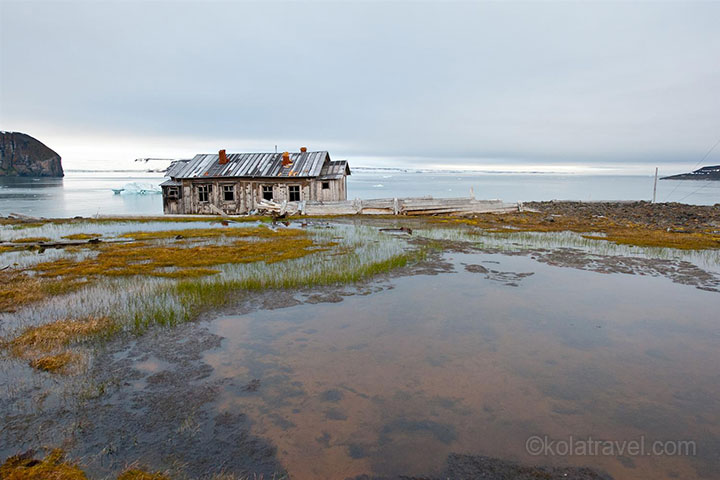 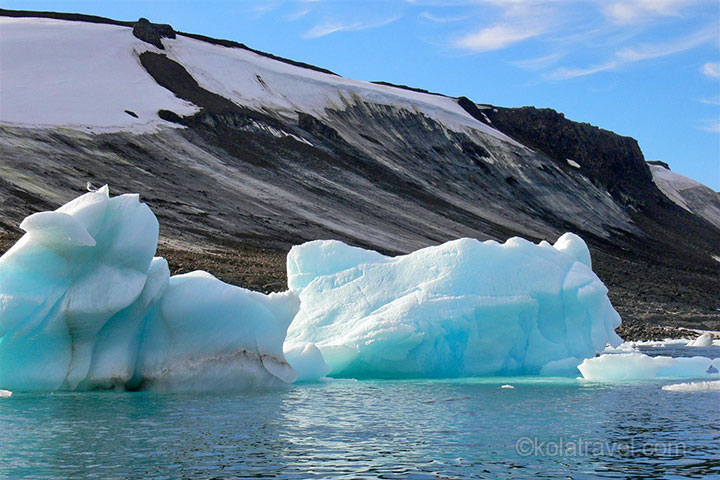 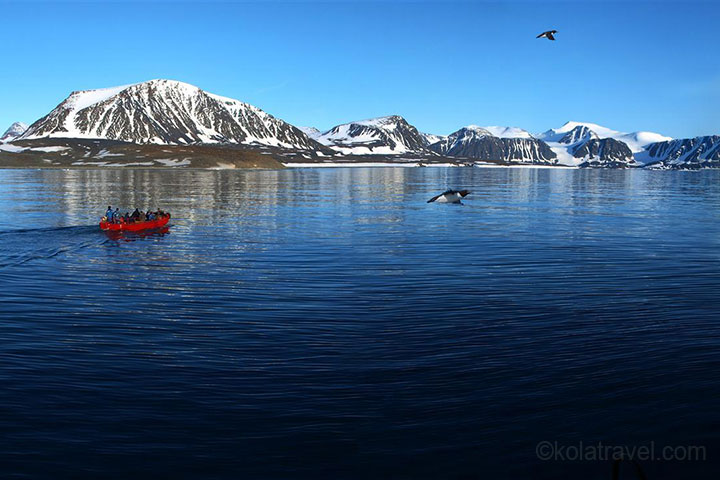 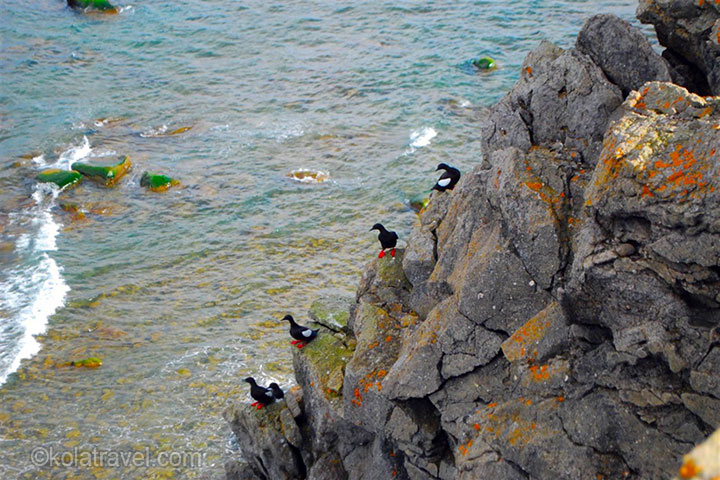 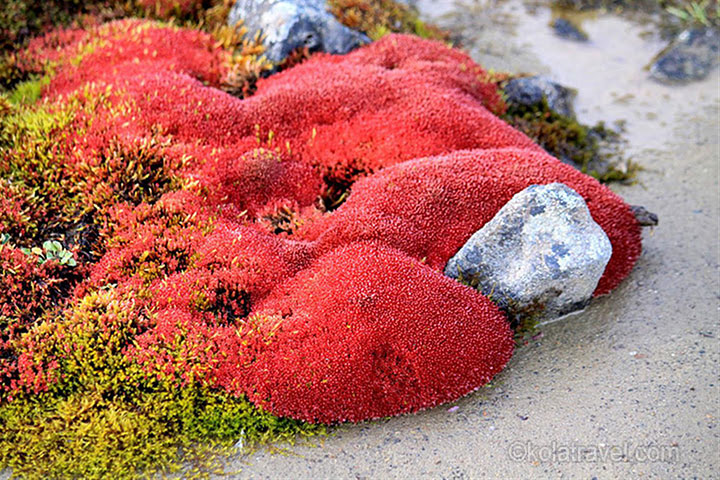 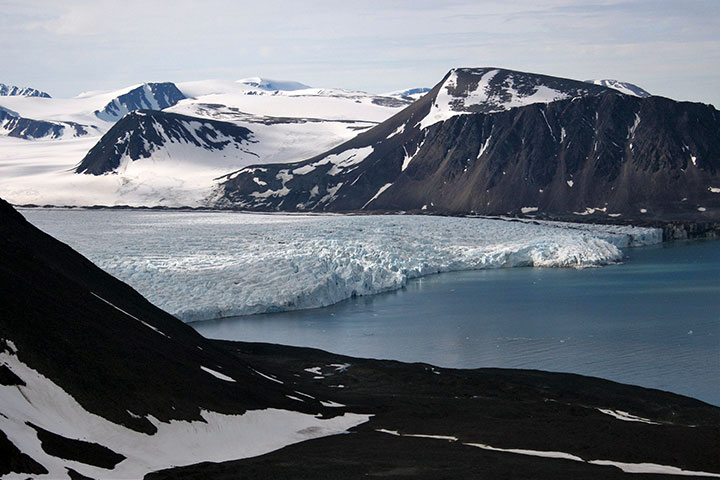 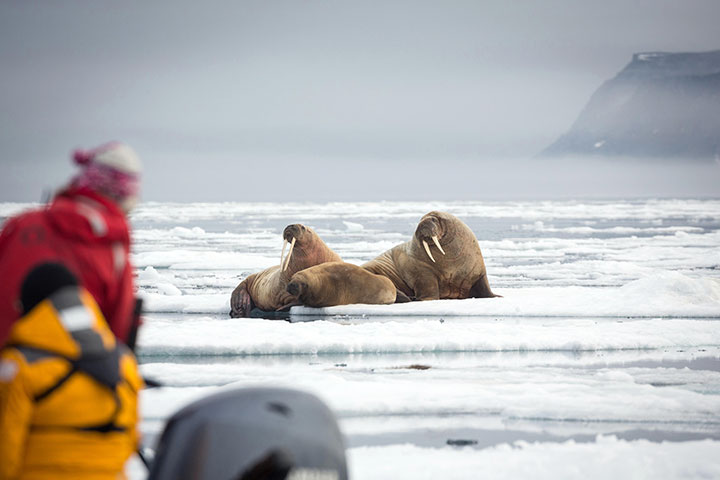 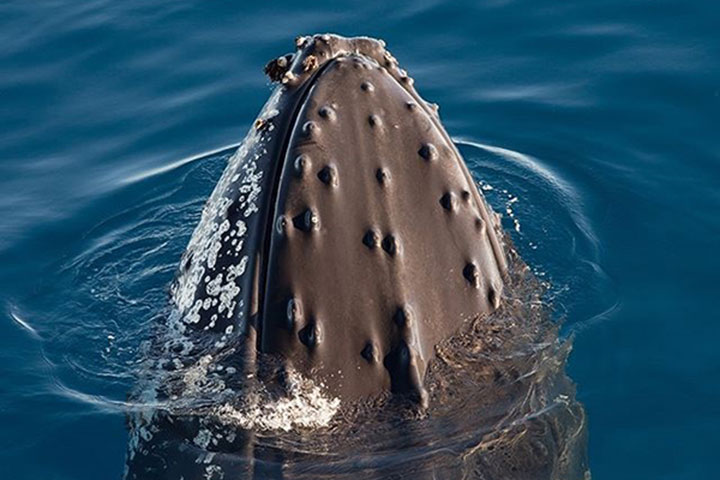 If this is what you'r looking for, just contact us for more information

The Arctic has been inspiring explorers for centuries, and our expeditions offer the chance for you to discover why. On this stirring voyage along Russia’s ice-draped coastlines, we invite you to become one of the first passengers to visit this little-known region and encounter sights rarely seen by even the most intrepid adventurers. Explore the most extreme regions of the Russian High Arctic with our Arctic Expedition to remote Russian Archipelagos. From the breathtaking glaciers of Novaya Zemlya and Franz Josef Land to the stark, secluded islands of the icy Kara Sea, the remarkable features of this isolated wilderness will leave you awed and inspired. An incredible journey that will take you to far-flung landscapes unlike anything you’ve ever witnessed. This exclusive 22-day itinerary is designed to spend more time exploring these pristine places, increasing your chances of encountering unique and magnificent wildlife such as whales, seals, muskox, walruses and polar bears. If weather and ice conditions allow, we will explore Severnaya Zemlya, the last major territorial discovery on the planet.

This expedition includes also the Expedition to Franz Jozef Land and Novaya Zemlya with an extension to Severnaya Zemlya.

Day 1: Welcome in Murmansk region
Arrival in Murmansk airport. Meeting a car with driver and transfer to the hotel in the centre of Murmansk city. Dinner on your own in a recommended restaurant. Overnight in the hotel.

Day 2: Embarkation in Murmansk
Breakfast. Depending on leaving time of the ship transfer to the port where you will be welcome aboard of the totally renovated ship "Ocean Adventurer". Get acquainted with the ship and the crew and settle yourself for your voyage to the North.

Days 3 and 4: Sailing on the Barents Sea
Today we sail through the Barents Sea, named for the great Dutch explorer Willem Barents, who led two expeditions to Novaya Zemlya in the 1590s. Your Expedition Team will prepare you for the adventures that await. Learn about the storied history and politics of the region, its fascinating wildlife, geology, ecology and climate, and the incredible sights you will soon explore. Expedition Staff will also keep a lookout for the seabirds, such as kittiwakes, skuas and fulmars, soaring above your ship. Whale and seal sightings may also be possible in this biologically rich sea.

Days 5 to 7: Explore Novaya Zemlya
The largest of the Eurasian arctic archipelagoes, the rarely visited Novaya Zemlya ("New Land") is the third-largest wilderness area in Europe. This seemingly long, narrow island actually consists of two main islands, Severny (northern) and Yuzhny (southern), separated by the imposing Matochkin Strait. As we explore Novaya Zemlya, expect a new adventure every day. Each expedition will be unique, depending on the weather and ice, but a few landing sites we strive to visit include Inostrantseva Bay, the Oransky Islands, Cape Zhelaniya, Cape Spory Navalok and Russkaya Gavan. Boasting one of the most picturesque glaciers in the entire archipelago, Inostrantseva Bay provides breath taking panoramic views of pristine arctic wilderness.

If conditions allow, we may explore ashore, or Zodiac cruise along the face of the glacier, at a safe distance, possibly witnessing the wonders of calving ice. Encounters with Brünnich’s guillemots (thick-billed murres) are likely, owing to a small colony in the coastal cliffs.

To the northwest side of Severny Island are the Oransky Islands. Wildlife abounds here, with a variety of animal and plant life to be discovered, Walrus have been sighted here on many previous expeditions. Coming across a walrus haul-out is unforgettable. These giant pinnipeds of the Arctic create a raucous as each walrus vies for a choice spot of coastline. Encounters with whales and seabirds are possible, as well as polar bears, a genetically distinct subpopulation here. A significant site in polar exploration, Novaya Zemlya also offers a number of opportunities for you to trace the footsteps of famous explorers and reflect on the region’s history.

Day 8 to 13: Explore the Kara Sea and Severnaya Zemlya
Say goodbye to Novaya Zemlya as we cruise farther east, exploring the Kara Sea. The westernmost Asian sea off Siberia, the Kara Sea is known as the "ice cellar" of the Arctic, as it is often encumbered by trapped ice floes. Ice conditions will be considered by your skilled captain during navigation—luckily sea ice happens to be a great habitat for iconic arctic wildlife. There are several sites and small archipelagoes along the Siberian coast we hope to explore, tracing the path of polar explorers searching for the Northeast Passage. Weather and ice will determine where we explore, but some areas we hope to visit include Russky Island, Troynoy Island and Cape Chelyuskin.

Both Russky Island and Troynoy Island are part of the Great Arctic State Nature Reserve, the largest reserve in Eurasia. Russky Island is the site of a former polar station, established, in part, to monitor navigation along the Northern Sea Route, the Russian section of the Northeast Passage. Troynoy Island is the largest of the Izvesti Tsik Islands, about 90 miles (150 km) off the coast of the Taymyr Peninsula. The island is uninhabited, except for the researchers at the weather station. Home to an ivory gull colony, the island is also frequented by polar bears. At the tip of the Taymyr Peninsula is Cape Chelyuskin, the northernmost point of the Russian and Eurasian mainland and the site of another active research station. Here, at "The edge of the earth", we hope to explore by foot.

Dependent on ice and weather conditions, an exploration of Severnaya Zemlya ("North Land")embodies the true spirit of adventure. Dominated by glaciers and polar desert, the archipelago was not discovered until 1913 and remained virtually unexplored till 1930–32, the last major undiscovered territory on earth. Amongst many possible destinations, we hope to visit a number of glaciers, including the Vavilov Ice Cap and those at Marat Fjord. If conditions are favorable, we may cruise the Red Army Strait, flanked by the massive Academy of Sciences Glacier (which also runs along the eastern shore of Zhuravlev Bay) and the smaller Rusanov Glacier. As one of very few people to ever explore this remote area in depth, you’ll want to have your camera ready to capture these amazing sights.

Day 14: Sailing on the Sea
There are several activities to keep you engaged while at sea. Attend dynamic presentations by your Expedition Team, relax in our polar library or simply spend some time on deck, admiring the sea and searching for wildlife.

Days 15 to 18: Explore Franz Josef Land
This remote group of 191 islands, many covered in ice, forms the most northerly archipelago in Eurasia and lies entirely within the Arctic Circle. A nature reserve, it is part of the Russian Arctic National Park. Weather and ice conditions will shape our exploration, but we do hope to explore historical sites, remote seabird colonies and walrus haul-out at some notable destinations, such as Cape Flora, Cape Norway, Bell Island and Tikhaya Bukta. Polar bear encounters are also possible.

On Jackson Island, Cape Norway is where Norwegian explorers Fridtjof Nansen and Hjalmar Johansen wintered from 1895 to 1896. The conditions were astonishingly difficult, but they survived until the summer and continued their journey south. The remains of their small hut are still here today, along with a memorial marking the event.

Exploring Tikhaya Bukta (Calm Bay), the site of an abandoned weather station on Hooker Island, will feel like stepping back in time. There is plenty to discover as you wander the ruins, immersed in Russian polar history, and you may even be able to send a postcard from the post office! The Stolichky and Appolonov Islands offer plentiful walrus encounters, as the lumbering giants can be found hauled out here. If ice and weather are in our favor, we’ll explore the area by Zodiac, at a safe distance, to view these pinnipeds of the Arctic in their natural habitat.

Another possible landing site, if time and weather permit, is Cape Tegetthoff on Hall Island, where we hope to visit the Barents memorial. The scenery here is spectacular, and we may be fortunate to view polar bears and Atlantic walrus.

Days 19 and 20: Sailing on the wildlife-rich sea
As your arctic expedition winds down you have a couple of days to sail through this wildlife-rich sea, where whales of various species are often seen. Take in a presentation, reminisce about your incredible journey with your shipmates, relax in the lounge while swapping stories and photos or enjoy the solitude of the sea. Expedition staff will be on hand to answer any remaining questions and spot wildlife.

Day 21: Disemabarkation Murmansk
Returning to Russia’s most northerly city Murmansk, you’ll have time to bid farewell to your Expedition Team and crew. Transfer to the hotel in the centre of Murmansk city. Dinner on your own in a recommended restaurant. Overnight in the hotel.

Day 22: Farewell Arctic Russia
After breakfast, depending on the flight to catch spend some time exploring more of World's biggest city above Polar Circle; Murmansk or take part in a (short) city excursion.

Important reminder: Embracing the unexpected is part of the legacy—and excitement—of expedition travel. When traveling in extremely remote regions, your expedition staff must allow the sea, the ice and the weather to guide route and itinerary details. This itinerary is a tentative outline of what you’ll experience on this voyage; please be aware that no specific itinerary can be guaranteed.

Group size: From one person

The following Arctic Expeditions are planned:

This Arctic Russia Expedition to Franz Josef Land and Novaya Zemlya can be extended with the following optionals:

YOUR ACCOMMODATION ON "MS OCEAN ADVENTURER".

"MS Ocean Adventurer" is totally renovated. A team of marine architects, engineers, interior designers and polar expedition specialists worked together to enhance this nimble and intimate fleet favorite. Upgrades include a refreshed look and feel throughout, plus the complete remodeling of the lounge, dining room and bar. All cabins received new linens and bathroom updates. Six new deluxe cabins as well as three new suites have also been added. Major technical enhancements include two new Rolls-Royce engines, which yield increased speed and fuel efficiency, and a minimized carbon footprint. 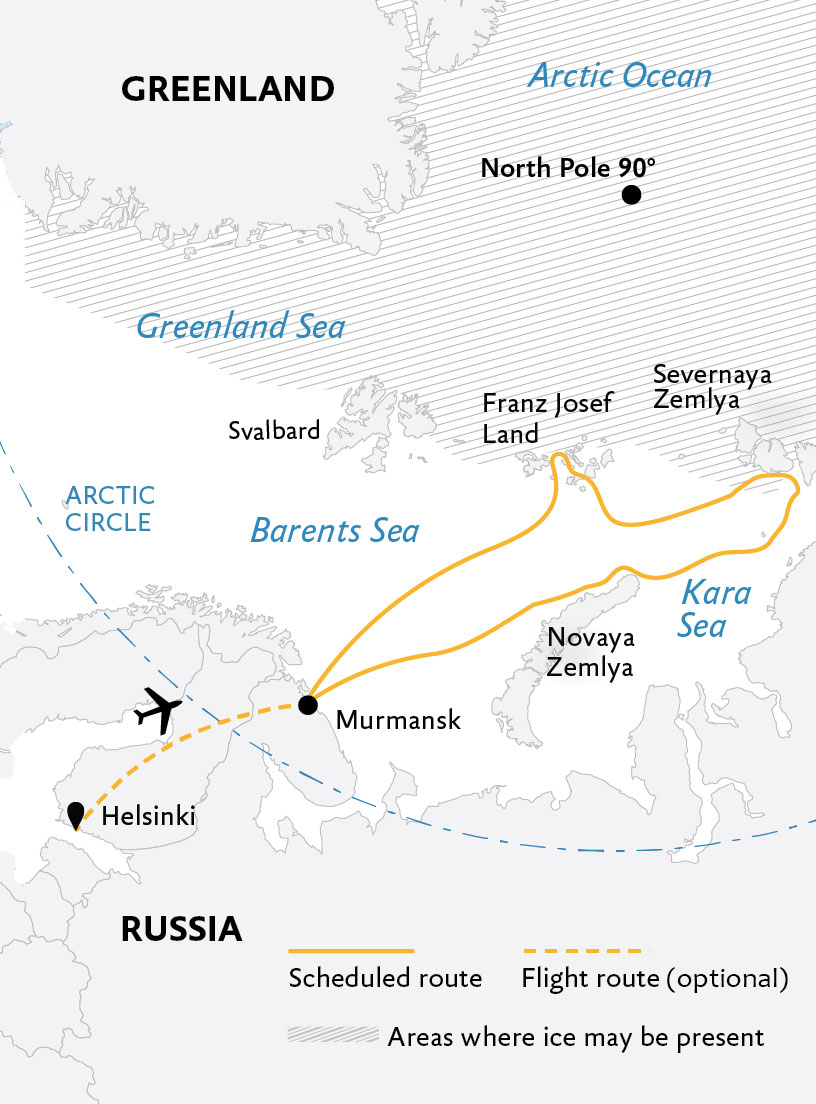