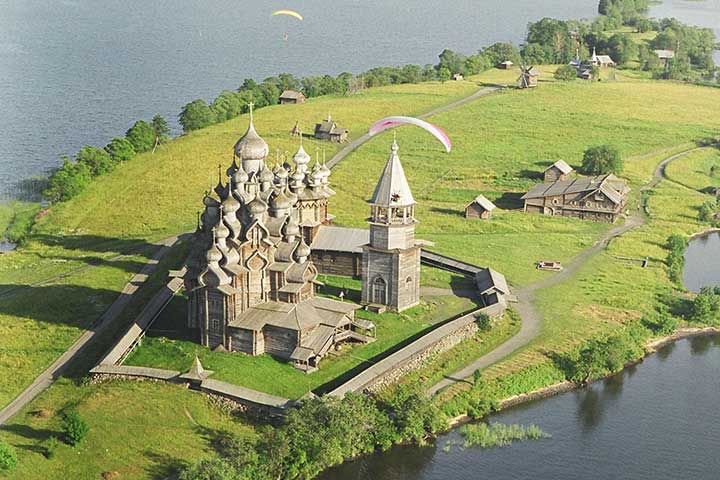 Welcom to Kizhi Island immerse yourself in
the ancient traditions
of Karelia. 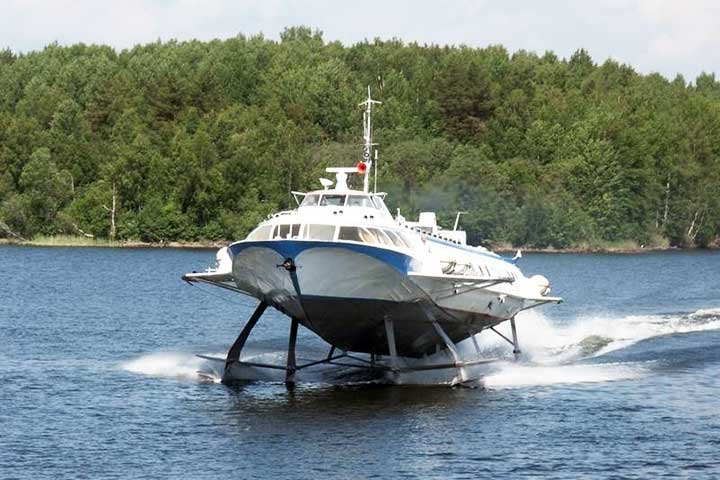 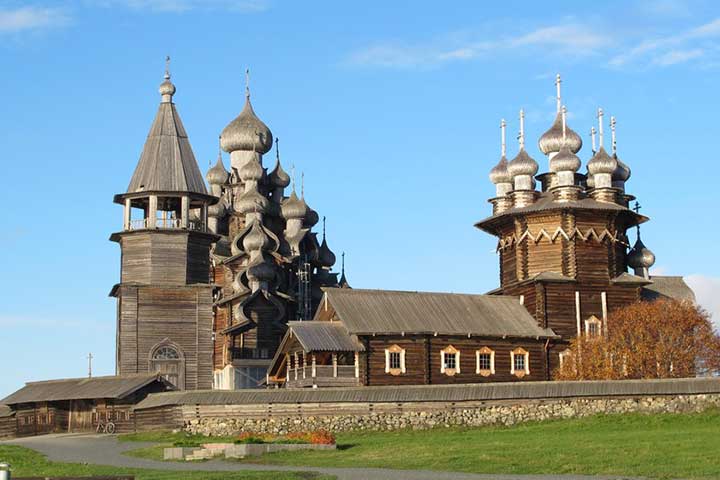 Open air museum Kizhi Island Excursion “The Masterpieces of Kizhi” Pogost of Our Savior is an UNESCO's World Heritage. 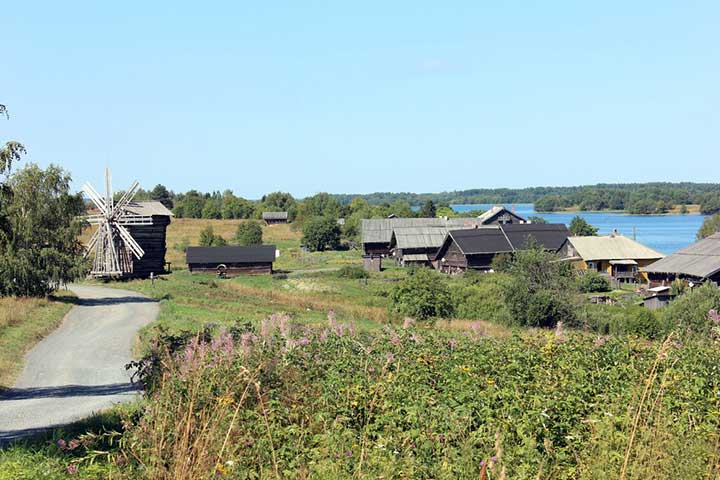 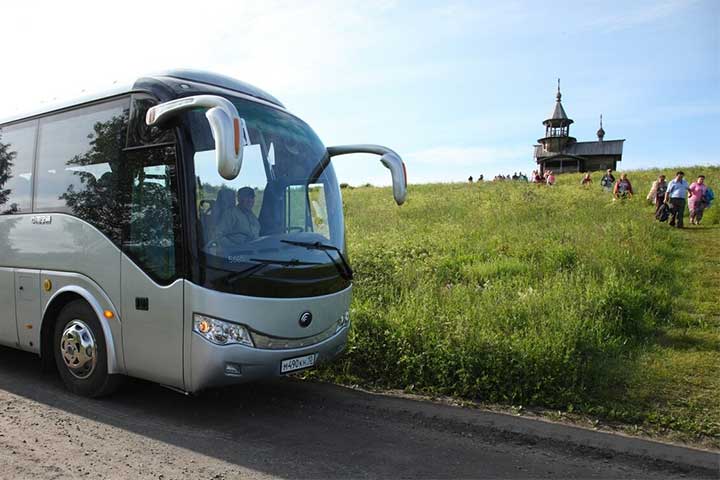 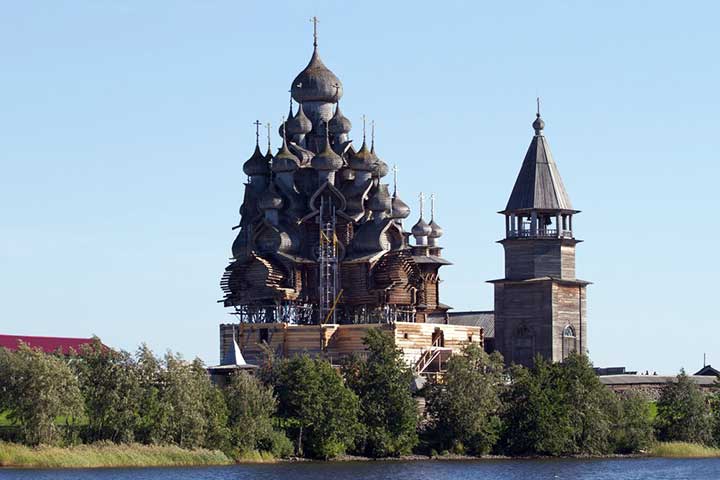 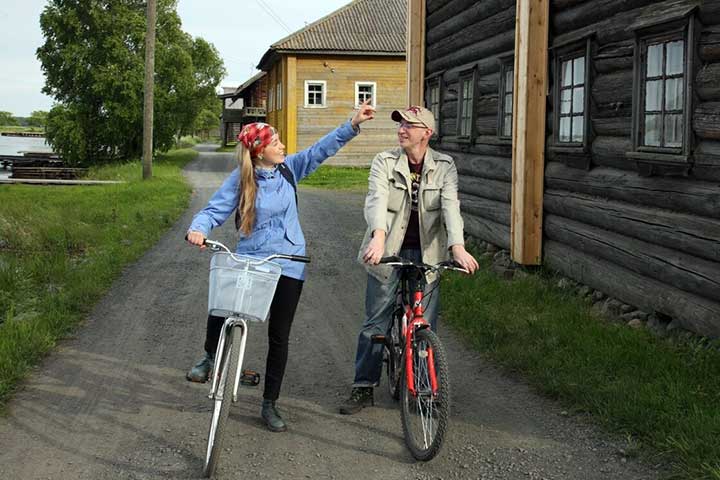 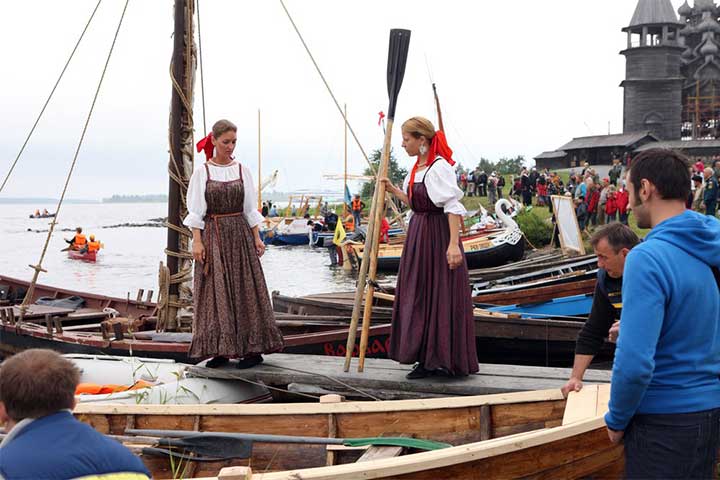 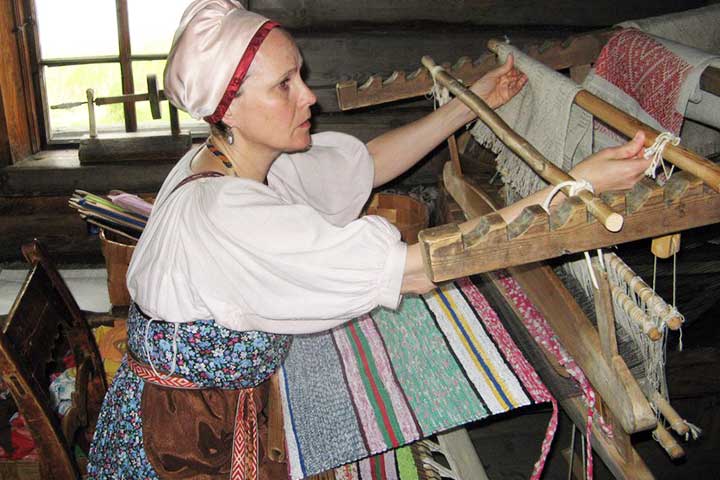 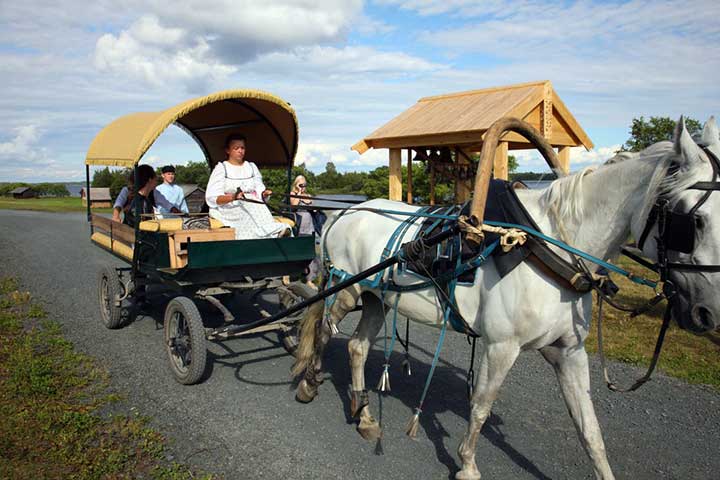 Open air museum Kizhi Island Excursion “Kizhi for one day” Watch all the sights
and beauties of the island in one day by horse and carriage. 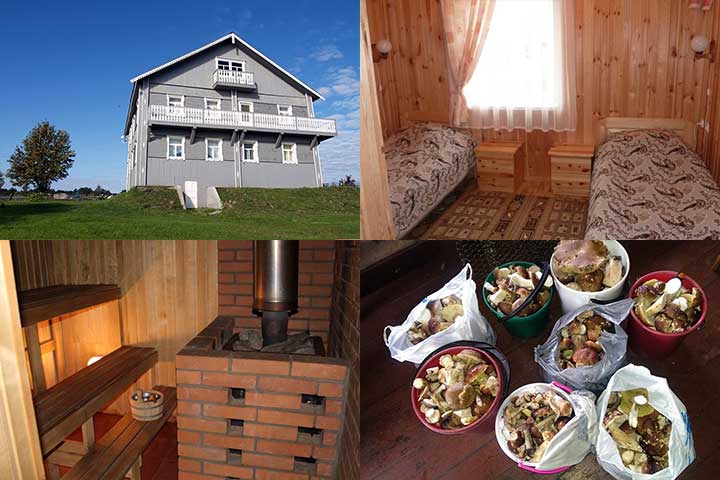 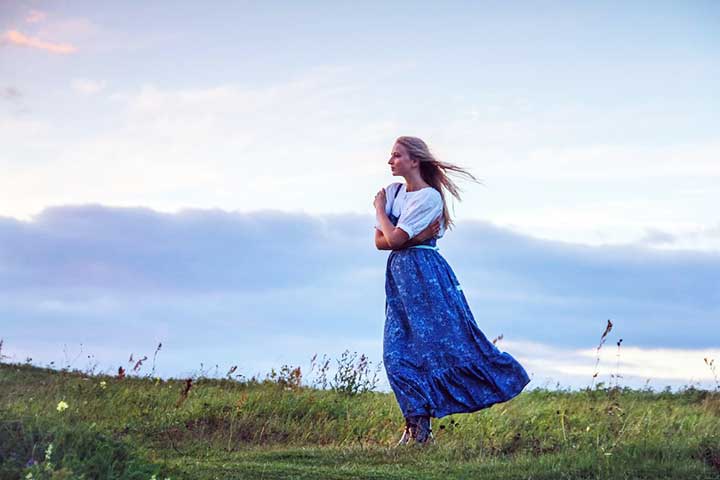 Open air museum Kizhi Island a small world full of wonders. Looking forward to meet you! Contact us for an overview

Kizhi Island is one of over 1650 islands in Lake Onega, the second largest lake in Europe. Lake Onega is found in the Republic of Karelia, and Kizhi is one of the largest outdoor museums in Russia. Kizhi focuses on peasant life and customs in the Russian north and includes 83 wooden structures, most of which date back to the 18th or 19th century.

One of the main attractions located there is the Transfiguration Cathedral built in 1714. Thirty thousand shingles, made of aspen wood, on twenty-two separate cupolas (domes) on five tents compose the ascending nest. The aspen wood reflects a myriad of hues changing the color of the cupolas depending on the light. A spectacular sight and hard to believe it was done with wood.

The collection of the Open-Air "Kizhi" Museum includes 89 monuments of wooden architecture: old chapels and houses, windmills and granaries, threshing barns and racks for drying crops…The gem of this collection is the 22 domed Church of the Transfiguration of Our Savior, 37 meters height. The Church of the Intercession of Holy Mary and the Bell-Tower located nearby emphasize the harmony and magnificence of the main Church.

Villages original to the island also exist, and some houses are still inhabited by locals. Villages on Kizhi Island demonstrate rural life in Karelia, its traditional crafts and tasks of peasant life. Throughout Kizhi Island are remarkable examples of wooden architecture.

The complex of buildings original to Kizhi Island, the Pogost of Our Savior, is on UNESCO's World Heritage Site list.

One day visit to Kizhi Island

Daily a hydrofoil boat goes from Petrozavodsk harbour to Kizhi Island. To be sure for a place on board it is better to reserve on beforehand. The boat trip takes 1 hour and 15 minutes. You can spend 4 hours on the island on your own or take part on one of the many interesting excursions. By foot, bus of on a carriage pulled by horse. An overview you will find under the "Excursion on Kizhi" tab.

If you need more time to spend for excursions then we offer you the possibility to stay overnight in a guesthouse and continue to next day.

According to UNESCO classification the "Transfiguration Church" belongs to the first category, named "unmatched creation of human genius". How such a masterpiece could appear on a small remote island? Zaonezhye is a special edge: it has created an original peasant world, keeping the traditional values and way of life lost by the end of the XIX century in other regions of Russia. Not only churches, but also houses collected here are masterpieces of architecture, telling about the people who lived here. During the tour you are going to see the unique many-domed churches with their icon painting decorations. You will visit a peasant house to learn how the people lived in the past centuries. You will listen to the chiming clock at the chapel of the Archangel Michael and will see the Church of the Resurrection of Lazarus which is the oldest in Russia and revered as an Orthodox shrine. During the tour, you can explore the exhibition "Ancient Russian Art of Karelia", "From the history of the parish of Kizhi" and others.

Duration of the excursion: 2 hours 15 minutes.

We will take a stroll along Kizhi villages: Yamka and Vasilyevo known from documents of the middle of the XVI century. We will see the largest and most beautiful island wooden house, entirely covered with thread; Chapel of the Assumption, which appeared on the island before the famous temples. We will get acquainted with the peasant life of the past as well as the nowadays life of Zaonezhskaya villages, visit the 19th century house in the Yamka village. We will climb the mountain Naryina - the highest point of the island, which is considered to be the ancient "place of power" and where now there is the Chapel of The Saviour. After the tour you can continue to explore the Kizhi architectural ensemble and visit the Church of Intercession.

Duration of the excursion: 2 hours 15 minutes.
This excursion is recommended for a second visit to Kizhi Island.

Restoration work of the unprecedented complexity is carried out in of the Church of Transfiguration. The temple has been posted on lifting structures: it is literally "hanging" in the air. And how to make the restoration of the wood? The excursion to the Carpenter Centre, which is usually closed to visitors, will open the invisible process. It turns out to be important not just to restore the monument, but also maximally to reproduce the old technology of building. You will see it with your own eyes during the tour.

KTEX134: “Secrets of Kizhi” - by bicycle with audioguide.

You are going to cross almost the whole Island from South to North. You will be able to visit places which are reached by tourists rarely. You will stop at the worship cross from the village Hashezero, will climb to the Narina hill where the chapel of the Saviour now stands, will reach the northern part of the Island which will introduce you to the culture of Pudozh forest area. You will see houses of Pudozhsky peasants. On the route you will discover a range of expressive view points from which Kizhi temples, villages, nearby islands appear in a completely new light.

Duration of the excursion: 3 hours.

The museum harbor presents various historical boats - from ancient gouged vessels to the famous “kizhanki”. You will learn about the secrets of boat makers, which passed down from generation to generation and you will see the boat sewing process, which has been restored thanks to laborious researches. The craftsmen use only the traditional tools and materials. The museum harbor will help to understand better the world outlook of the inhabitants of Zaonezhye where the waterways were the main highways, and boats - the most important means of transport. You will visit the exhibition "The People's shipbuilding and shipping" in the house of a peasant Sergeyev, and boat workshop, and the forge of the Suysar village.

Would you like to weave a rug by own hands, or to forge a nail, or to spin thread? Under the guidance of our masters you will learn old crafts Karelian peasants. Please, make your choice to have a master-class: Blacksmithing skill, or weaving, or spinning.

KTEX137: “Villages of Kizhi Island” - by horse and carriage.

You will make a fascinating ride in the cart to the central part of the island, where the old Kizhi villages Yamka and Vasilyevo are situated and will meet local inhabitants.

Duration of the excursion: 30 min.

The program allows you to see almost all the sights and beauties of the island moving by carriage around the island within one day. First we will do a hiking part of the tour to visit the main exposition and then we continue exploring the historical villages and objects in the carriage pulled by horses. During the tour, we will visit Kizhi architectural ensemble, will watch a homestead of Karelian peasant Yakovlev, will listen songs of a folk ensemble, will see old villages, Restoration Workshops and other places of interests. We will see a lot of things which usually is possible to see for three or four visits.

Duration of the excursion: 3 hours.

If you like to stay longer on Kizhi Island for sightseeing or taking part on excursions, why not to stay the night on this unique archipelago in a cosy guesthouse. At a agreed time a ferrymen picks you up and bring you to a guesthouse located in the neighbour island (1 km). Dinner and banya (Russian sauna).

The next day after breakfast you will be brought to the main Kizhi Island and you can continue sight-seeing. At the end of the afternoon you can take the hydrofoil boat back to Petrozavodsk or stay another night at the guesthouse.

We can make this short cruise by train and hydrofoil fit to everyone's itinerary.
Just contact us.